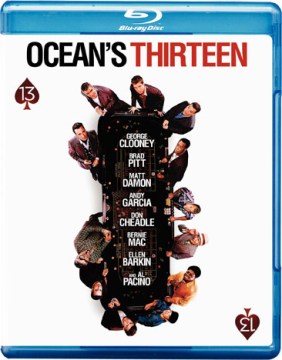 All Copies Checked Out
Ocean's thirteen
(2007)

When one of their own, Reuben Tishkoff, partners and builds a casino and hotel with known casino owner Willy Banks in Las Vegas, the last thing he ever wanted was to get cut out of the deal by the loathsome Banks. Banks' even goes so far as to finding amusement in Tishkoff's misfortune when the double crossing lands Reuben in the hospital because of a heart attack. However, Danny and his crew won't stand for Banks and what he's done to a friend. Uniting with their old enemy Benedict, who himself has a vendetta against Banks, the crew is out to pull off a major plan. One that will unfold on the night Banks' newest hot spot opens up, when the crew is out to bankrupt one of the city's most despised businessmen. But this is not about the money, this time it is for revenge

Special features: commentary by director, Steven Soderbergh and screenwriters Brian Koppelman and David Levien; "Masters of the heist:" a documentary on the most sophisticated heists ala the Ocean's films; "Vegas: an opulent illusion:" a look at how Las Vegas has created an illusory world of opulence through it's design documentary; "Jerry Weintraub walk and talk: Weintraub takes us on a tour of the casinos" featurette