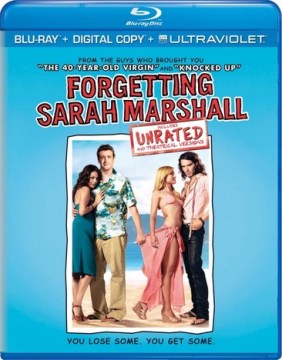 Peter has his heart broken by Sarah Marshall, his girlfriend of five years. Sarah is an actress on a television crime series. After breaking up with Peter, she moves on with her life and her new boyfriend, Aldous, a British rock star. Peter is devastated, and after trying unsuccessfully to put her out of his mind, he decides to take a vacation to Hawaii to unwind. Unfortunately for Peter, Hawaii is also the chosen destination of Sarah and Aldous. Of course, they end up at the same hotel, and in adjoining rooms. The hotel staff is sympathetic to Peter's problem, especially Rachel, and they encourage him to forget Sarah

MPAA rating: R; for sexual content, language and some graphic nudity [and] Unrated