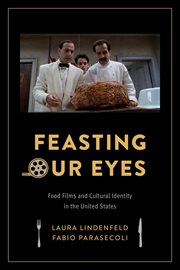 Available
Feasting our eyes: food films and cultural identity in the United States
(2016)
By: Lindenfeld, Laura

Big Night (1996), Ratatouille (2007), and Julie and Julia (2009) are more than films about food - they serve a political purpose. In the kitchen, around the table, and in the dining room, these films use cooking and eating to explore such themes as ideological pluralism, ethnic and racial acceptance, gender equality, and class flexibility - but not as progressively as you might think. Feasting Our Eyes takes a second look at these and other modern American food films to emphasize their conventional approaches to nation, gender, race, sexuality, and social status. Devoured visually and emotionally, these films are particularly effective defenders of the status quo. Feasting Our Eyes looks at Hollywood films and independent cinema, documentaries and docufictions, from the 1990s to today and frankly assesses their commitment to racial diversity, tolerance, and liberal political ideas. Laura Lindenfeld and Fabio Parasecoli find women and people of color continue to be treated as objects of consumption even in these modern works and, despite their progressive veneer, American food films often mask a conservative politics that makes commercial success more likely. A major force in mainstream entertainment, American food films shape our sense of who belongs, who has a voice, and who has opportunities in American society. They facilitate the virtual consumption of traditional notions of identity and citizenship, reworking and reinforcing ingrained ideas of power