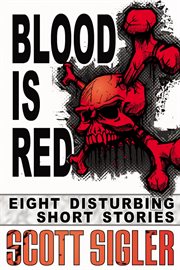 A collection of eight horror stories created by New York Times best-selling novelist Scott Sigler, author of INFECTED, CONTAGIOUS and ANCESTOR. This eBook-only title features seven tales from Scott's six years of free audiobook podcasts, including the Parsec Award-winning "Red Man," plus the brand-new novella "Hunter Hunterson & Sons." Scott still gives away his audio stories -- for free -- every week. Stories in BLOOD IS RED: Number One with a Bullet In the high-stakes world of the National Football League, a wasted draft choice can cost careers and damage a franchise for years to come. The investigators of NFL security dig into the past of potential draft picks. When they investigate sure-fire number-one pick Eugene Patterson, however, they find far more than they want to know. &#x2028%x; Red Man To be marked as a sex offender, a pedophile, a child rapist, is to carry stigma that all but banishes you from society. And if that mark is literal -- a permanent, inoperable face tattoo -- anonymity vanishes, and all who see you know of your crime. For a man who is wrongly convicted of horrible deeds, this mark becomes his life. Red Man won the 2008 Parsec Award for Best Short Story. Wolf In the time before man, one social animal ruled the Americas. The wolf. Wolf packs roamed the continent, hunting and killing and breeding. They were the dominant species: a full wolf pack could back down any predator, even the great grizzly bears. But before any wolf ever saw the death that would walk on two legs, there came another danger ... The Great Snipe Hunt Nature abhors a vacuum. One such vacuum exists in the "urban ecologies" of our cities. From bacteria to insects, from rodents to hawks, from feral cats to the mass numbers of pigeons, plants and animals weave together a web of life that goes mostly unnoticed by humans. What is missing from this mosaic? The role of the dominant predator. Four college students set out to find this mythical creature, the "Snipe," and learn that a vacuum isn't the only thing nature abhors. Iowa Typhoon Come on, come visit Fenders Pointe, IA. We'd love to have you stop by, see the trees, smell the flowers, and relax with our Midwestern hospitality. Only, you should try to schedule around the rainy season. If you're here when the typhoons hit, we'll be happy to welcome you as a permanent resident. Sacred Cow There is a fine line between absent-minded genius and idiot savant. Gordo Gordon keeps a foot planted firmly on either side. Father Al knows this better than anyone. Like a guardian angel, Father Al watches over Gordo and tolerates the young man's endless -- and useless -- inventions. When Gordo creates a theory to track "prayer energy," however, Father Al will find a religious secret that puts his faith to the test. Hunter Hunterson & Sons Welcome to the family business. Hunter Hunterson and his kin live in Slayerville, KY, making their living chasing crack-smoking ogres, peeping-tom phantoms, bail-jumping zombie pimps and the occasional rabid unicorn. They are bounty hunters that track down the netherworld's most wanted. When a methed-out vampire (and family friend) goes on a road-trip rampage, Hunter and his kin pack up the truck and follow the trail of corpses all the way to San Francisco. This reality-TV style story feels like a combination of "Dog the Bounty Hunter" meets "Ghostbusters" meets "The Beverly Hillbillies." Hunter's "war journal" is a mix of tawdry laughs and gut-churning horror