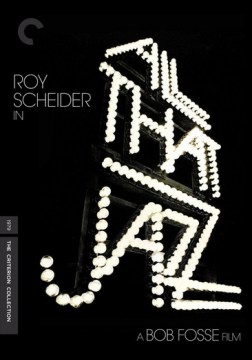 The preternaturally gifted director and choreographer Bob Fosse turned the camera on his own life for this madly imaginative, self-excoriating musical masterpiece. Roy Scheider gives the performance of his career as Joe Gideon, whose exhausting work schedule-mounting a Broadway production by day and editing his latest movie at night; and routine of amphetamines, booze, and sex are putting his health at serious risk

Originally produced as a motion picture in 1979

Special features: New 4K digital restoration; Audio commentary by editor Alan Heim and actor Roy Scheider; New interviews with Heim and Fosse biographer Sam Wasson; New conversation between actors Ann Reinking and Erzsebet Foldi; Episode of the talk show Tomorrow from 1980; Interviews with Fosse from 1981 and 1986; On-set footage; Portrait of a choreographer, a 2007 documentary on Fosse; The soundtrack: Perverting the standards, a 2007 documentary about the film's music; Interview with George Benson from 2007; A booklet featuring an essay by critic Hilton Als

All that jazz (Motion picture)