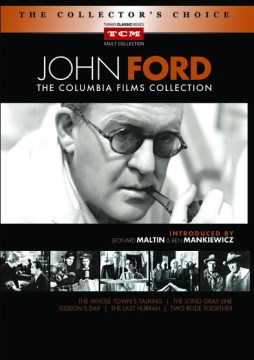 "Sony Pictures Home Entertainment, The Film Foundation and Turner Classic Movies partner to present this collection of five films, all fully restored and remastered ... showcasing the diversity and quality of [John] Ford's work for Columbia Pictures over the course of nearly three decades, in genres as diverse as Biopic and Romantic comedy"--Container

Whole town's talking: "A bland accountant ... is mistaken for a notorious gangster and the gangster himself ... takes advantage of the resemblance for criminal schemes"--Container

Title and credits from container

Long gray line: "The real-life story of a tough Irish immigrant whose 50-year career at West Point takes him from dishwasher to athletic instructor to non-commissioned officer, allowing him to guide generations of young officers"--Container

The long gray line, based upon 'Bringing up the brass' by Marty Maher and Nardi Reeder Campion. Gideon's day, from the novel by J. J. Marric. The last hurrah, based on the novel by Edwin O'Connor. Two rode together, based on a novel by Will Cook

Gideon's day: "A typical day in the life of Inspector George Gideon ... which has him dealing with both mundane family matters and the foiling of elaborate crimes"--Container

Gideon's day: "Released in the U.S. only in a truncated, black and white version as Gideon of Scotland Yard"--Container

Last hurrah: "A big city mayor ... rises from humble origins by building a powerful political machine, but struggles to maintain his position amidst charges of corruption leveled at him by the elite citizens whose power he has usurped"--Container

Two rode together: "An unethical US Marshal ... is summoned to accompany an army officer ... on a mission to secure the release of two prisoners from the Comanches"--Container

Not rated by MPAA