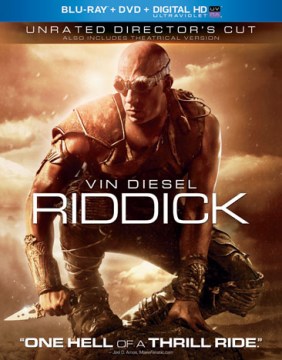 "A dangerous, escaped convict wanted by every bounty hunter in the known galaxy, Riddick has been left for dead on a sun-scorched planet that appears to be lifeless. ... The only way off is for him to activate an emergency beacon and alert mercenaries who rapidly descend to the planet in search of their bounty"--Container

"Based on characters created by Jim and Ken Wheat."

Videodisc release of the 2013 motion picture

Bonus features only on Blu-ray include the featurettes The world of Riddick, Riddickian tech, The Twohy touch, Vin's Riddick, Meet the mercs, and, Riddick: blindsided

Bonus features on DVD include the featurettes Vin's Riddick, Meet the mercs, and, Riddick: blindsided

English or Spanish dialogue with optional Spanish and French subtitles; optionally subtitled in English for the deaf and hard of hearing (SDH)