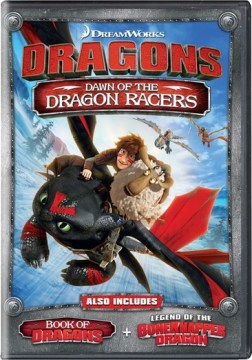 "Based upon the "How to train your dragon" book series by Cressida Cowell."

"Hiccup, Toothless, and their fearless friends are flying higher than ever in an all-new adventure - and Berk will never be the same! When a hunt for lost sheep turns into a fierce, fun-filled competition, the villagers will defy tradition to prove who is the fastest in the island's first Dragon Racing Championship."--Container

In English, French or Spanish with optional subtitles in French and Spanish; optionally subtitled in English for the hearing impaired (SDH); closed-captioned

Cowell, Cressida. How to train your dragon.

Dawn of the dragon racers

At head of title: Dreamworks

How to train your dragon 2

Films for people with visual disabilities.