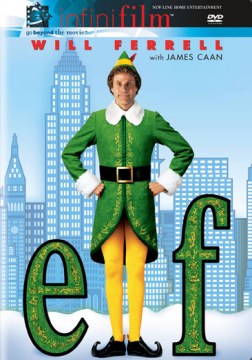 A human baby accidentally ends up at the North Pole and grows up among the elf community. Buddy, as he comes to be known, knows that he's "special." When he's 30, Buddy learns from Santa that he's really a human. He decides to go in search of his father, to find out where he belongs. He walks to Manhattan, and is immediately run over by a cab. At first his father rejects him and Buddy ends up in a department store where other elves are working. But all the while, things are looking bad for Santa Claus. When Santa crashes his sleigh in Central Park, it's Buddy's moment to shine

DVD-ROM features: PC running Microsoft Windows 98SE or higher, InterActual player installed (included on disc), Internet Explorer 5.0 or higher, Macromedia Flash 6.0 and an Internet connection, DVD-ROM drive, and a software or hardware DVD player. DVD System requirements for This DVD will not work in a CD-ROM drive and the DVD-ROM features are not available on Apple Macintosh

Guy Walks Into a Bar (Firm)