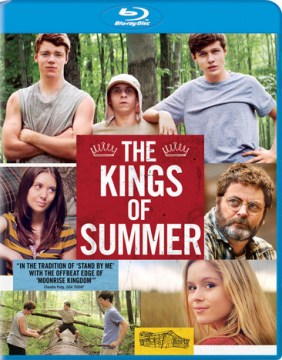 All Copies Checked Out
The kings of summer
(2013)

Verging on adolescence, Joe finds himself more and more aggravated by his dad₂s attempts to control his life. Declaring freedom, Joe and his best buddy Patrick, along with an odd kid called Biaggio, escape to the woods. He declares that they're going to construct a house, just for them, with no parents or responsibility. There they discover that they are in control of their destinies, all alone out in the forest

Rating: R; for language and some teen drinking

English or Spanish dialogue; Spanish or English subtitles; subtitled for the deaf and hard of hearing