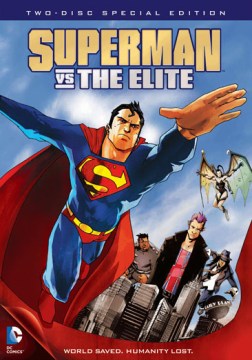 Available
Superman vs the Elite
(2012)

Based on the comic created by Jerry Siegel and Joe Shuster

When catastrophe strikes, Superman once again rushes into action, but his time he gets some unexpected help from a new squad of super heroes calling themselves The Elite. Comprised of four powerful beings and spearheaded by the brash and calculating Manchester Black, this new force brings a raw, no-holds-barred mentality to the battle against evil. With swelling public support of The Elite's vicious methods, the stage is set for a showdown that has Superman feeling outnumbered and outdated. Featuring a stellar voice cast headed by George Newbern, Pauley Perrette and Robin Atkin Downes, this epic DC Comics Premiere Movie adventure explodes with a clash of styles and super powers that begs the question: which will break first - The Man of Steel or his code?

Rating: PG-13; for action violence and some language

English, French or Spanish dialogue; Spanish, English or French subtitles; English subtitles for the deaf and hard of hearing

Superman versus the Elite