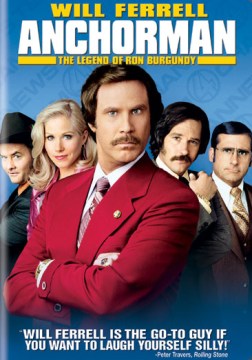 All Copies Checked Out
Anchorman the legend of Ron Burgundy
(2004)

It's the 70's and Ron Burgundy is the king of San Diego. He's the most popular news anchor in town. He and his all male news team rule the city with their sauve looks, minimal IQ's and unbelievably bad hair. In Ron's world, women don't belong in the newsroom. So when rising star reporter Veronica Corningstone fills in for Ron one night and the ratings soar, it becomes more than a battle ... it becomes war