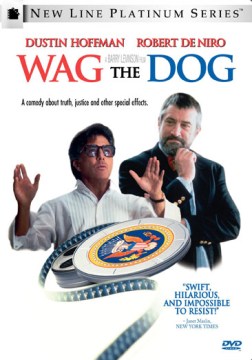 Based on the book: American hero / by Larry Beinhart

When the President is caught in a sex scandal less than 2 weeks before the election, "Mr. Fix-it" decides they need a war to distract the public's attention and he calls on Hollywood's top producer to create it

Originally released as a motion picture in 1997

Special features: audio commentary by Barry Levinson and Dustin Hoffman; featurette From Washington to Hollywood and back; The line between truth and fiction : an essay on politics and the media; theatrical trailer; cast and crew biographies; filmographies

In English with optional soundtrack in French; optional subtitles in English, French or Spanish; closed-captioned in English for the hearing impaired