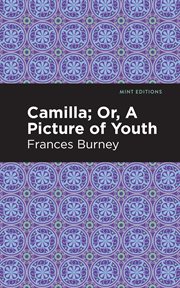 Camilla; Or, A Picture of Youth (1796) is a novel by Frances Burney. Both satirical and serious, comedic and Gothic, Burney's novel helped establish her reputation as one of the most popular writers of eighteenth-century England. Referred to in Jane Austen's Northanger Abbey (1803) and Maria Edgeworth's Belinda (1801), Camilla; Or, A Picture of Youth was a popular and critically acclaimed novel that served as inspiration for some of the leading literary figures of the early nineteenth century. After years of silence, Mr. Augustus Tyrold moves to the rural estate of Cleves to be near his brother Sir Hugh, who lives at a local parsonage. Lonely and crippled, Sir Hugh hopes to act as a mentor to his nieces and nephews. He takes a liking to Camilla, the middle daughter, and endeavors to make her his heiress while raising her in his own household. Although initially cautious, Mr. and Mrs. Tyrold eventually send Camilla to live at Sir Hugh's home, where her uncle decides to host her tenth birthday party. When a lapse in judgement leads to Camilla's younger sister contracting smallpox, Sir Hugh attempts to remedy the situation by naming Eugenia his heiress instead. Living with her uncle, Eugenia enjoys an unusually thorough education under the tutelage of Dr. Orkbourne, a classical scholar who quickly takes to the enthusiastic and intelligent young girl. Meanwhile, Camilla becomes entangled in a love triangle involving her father's ward Edgar and her cousin Indiana. Despite the mutual affection between Edgar and Camilla, Indiana has entertained the thought of marrying the handsome, wealthy man from a young age, when Sir Hugh thought it prudent to predict their future marriage. As Sir Hugh's plans for the Tyrold youths meet increasingly serious obstacles, and as debts threaten the wellbeing of the entire family, Camilla is forced to navigate a world in which decisions seem always to be made in her interest by those with their own in mind. With a beautifully designed cover and professionally typeset manuscript, this edition of Frances Burney's Camilla; Or, A Picture of Youth is a classic of English literature reimagined for modern readers