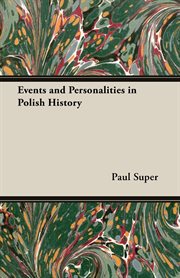 Available
Events and personalities in Polish history
(2020)
By: Super, Paul

The Polish people enter into recorded history with the conversion of their ruler Mieszko to Christianity in the year 966 A. D., this enlightened leader bringing his people with him into the family of Christian nations. With this event Poland emerges from among the Slavic tribes occupying the areas east of the Elbe and becomes enrolled among the historic and civilized countries of Europe. Both the causes and the consequences of that act are of more than purely Polish interest. As far back as Charlemagne there had begun an expansion of the Teutonic nations toward the east. This is that vast movement called the Drang nach Osten, 'the pressure toward the east'. The Slavs between the Elbe and the Oder, less warlike, smaller in stature than the Teutons, not well organized, relatively ill armed, were slowly subjugated. When Otto I of Saxony was crowned Emperor in 962 his already great power so enhanced that he became a menace to all the Slavs east of him. Mieszko soon saw that the only means of preventing the enslavement or extermination of his people lay in the same alliance that had so strengthened Otto, that with the Church. For as long as the Poles were heathen they were the legitimate prey of any Christian king, but as Christians they would at once be on a par with other western nations. Their entering the fold of the Catholic Church would deprive Otto of a valid excuse for incursions into their territory, win the sympathy of the other nations of Christendom, and gain the favour and advocacy of the Pope. By calling in monks from France and Italy they would forge valuable ties with those lands. These were the motives prompting Polish adhesion to the Christian Church. The results were not only good but momentous. The nation became really and increasingly Christian. In the first centuries of Christianity the people received the light of Latin learning and the advantages of western civilization, largely from the hands of Benedictine, Eremite, and Cistercian monks from the monasteries of Liege, Cluny, and Monte Casino. The Pope became their advocate. But two results even more far-reaching than these were determined by. this step. First, in deciding' to be Catholic, Poland decided to face west. The Czechs had already taken the same step. But when Poland also became Roman Catholic, a second, less desirable effect was permanently to divide Slavdom, for most of the other Slav nations, the Russians, the Bulgarians, and the Serbs, are of the Eastern Orthodox faith