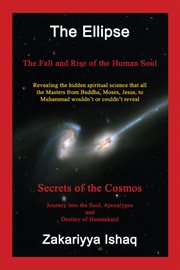 The Hidden Secret of the Ages Revealed. For metaphysical and spiritual enthusiasts. The Ellipse: The Fall and Rise of the Human Soul, Secrets of the Cosmos describes the cosmic laws of the universe ruling the reality of the human experience and the destiny of humanity. It is an in depth study of the spiritual science that is the source of all religion, and the cause of the human condition. This is the real Matrix. The term ellipse which means imperfect circle, as opposed to the perfect circle, is the updated metaphor that replaces the traditional concepts of God and the devil, and good and evil as the human race evolves out of the age of mythology to the era of the merging of science and spirituality. This spiritual saga describes the inner and outer soul of the universe, the apocalypse, and the destiny of the human race. Delving deeper than any metaphysical writer of the past or present, the book reveals new insights about the fall of man and the soul's journey to its ultimate destiny in unraveling the mysteries of its existence. It also clarifies pervasive distortions and misconceptions within religion and metaphysics. About the Author: Zakariyya Ishaq, a writer, researcher in mythology, and practitioner of Integral Metaphysics, is a thirty year seeker of esoteric knowledge, and a student in the wisdom traditions of Sufism, Islam, Yoga, Buddhism, Taoism, Kabbalah, Christian Gnosticism, and Hermetic Science. Having drunk deep at the ocean of mystical knowledge he reveals the secrets of the cosmos in The Ellipse that answers many of the age old questions that have challenged the understanding of believers in God, philosophers, and mystical seekers by exploring these topics: 1) The essence of man, 2) The origin of evil and suffering, 3) The end of evil and suffering, 4) A definition of God, 5) The reality of creation, 6) The nature of the soul, 7) The burden of the apocalypse, 8) A new understanding of the Jesus mystery, and 9) The destiny of humankind. This dynamic mystical cosmology is explained so the laymen and practitioners of metaphysics, religion and New Age ideas can enjoy an inspirational book that exhorts the world to peaceful co-existence and unity, and at the same time be well informed on the spiritual science that are at the root of their practice, and belief