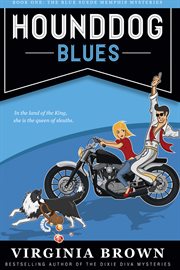 Who says a Gen X hipster can't solve old-school mysteries? Harley Jean's a failed college student. Her brief career in corporate banking went up in flames. She can't find Mr. Right and might settle for Mr. Wrong. She's twenty-six-years old--staring down the barrel at thirty--and now she works as a tour guide in the whacko land of Elvis. She's named after a motorcycle. Her dad's an Elvis impersonator. Her Mom talks to spirit guides. Someone kidnaps her family's dog--named King, in Elvis's honor. There's a ransom note. And then, things really get weird. Memphis tour guide Harley Jean Davidson is about to enjoy a rare day off when her parents call with news that King, their border collie, has been dognapped. Harley Jean's mom insists the culprit is Bruno Jett, their next-door neighbor. Harley Jean would rather run over her own foot with a motorcycle than talk to him. He's drop-dead gorgeous--with a dangerous attitude she'd like to avoid. But King has to be rescued, so she sets off to find him. Harley Jean gets more than she bargains for when she finds a body, as well. Bruno Jett is definitely involved, but how? The Memphis P.D. wants to pin the murder on Harley Jean's dad. Now it's up to her to clear his name . . . and avoid becoming the killer's next victim. Leaving corporate banking for a job free of stress had been a matter of survival. So here she was, in her late twenties and burned out, but finally in a job she didn't have to take home with her at night. It was a good trade-off--most of the time. At least, when she didn't have to deal with a very sexy possible murderer . . . The basement door opened. Looking up, she saw Jett through the cracks in the wooden stairs. For a moment he just stood on the top step, the door propped open with his foot, then he let it close softly behind him but remained still and silent. He knew someone was here. The lights . . . she'd left the lights on. She barely breathed, just shallow breaths to keep from passing out, afraid he'd hear her. Bruno Magli shoes descended to the second riser. She briefly closed her eyes, thoughts of O.J. and his infamous shoes reverberating ominously in her brain. Surely, it was coincidence. The shoes descended another step, then another, and she held her breath until her ears rang and her lungs ached. The shoes stopped on the second from the bottom stair. She saw denim though the gaps, dark socks, and long legs--she looked up and her gaze locked with dark blue eyes peering at her through the risers. Oh, damn. He smiled, but it wasn't a very nice smile