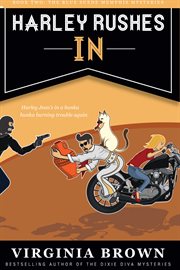 Local Tour Guide Breaks Jewelry Theft Ring and Helps Crack Murder Case, read the large headline. The leading sentence in the article said so much less than had really happened: Harley Jean Davidson, 27, tour guide for Memphis Tour Tyme, had a narrow escape from jewelry thieves Friday night that ended with an arrest on charges of grand larceny, attempted murder, and two counts of murder. Ms. Davidson was instrumental in capturing the suspect . . . In Hound Dog Blues, Harley Jean proved that a Gen X slacker can kick butt along with the rest of the crime-solving gurus. Now she's up to her handlebars in mystery again. Her Aunt Darcy, an interior designer, needs Harley's help catching a smuggler of prized artifacts. When Harley finds Aunt Darcy's suspicious business partner hanging off her shop's elk antlers, Harley can't help but wonder if Aunt Darcy murdered him. Soon Harley's already quirky life spins way off the Normal Meter again, with another corpse in the mix, an assault by cranky farm animals, a kidnapping attempt, and surprise assistance from a temperamental Siamese cat. Add hunky detective Mike Morgan to the trouble, plus the usual collection of Elvis impersonators, psychics and unpredictable relatives. The city of the blues, the King and the mighty Mississippi is about to get steamy. The jailhouse will rock, someone may get caught in a trap, and Harley's in the middle of it all-taking care of business. Maybe she was in mid-life crisis. Only four more months and she'd only be three years away from thirty, and here she was with just one serious relationship behind her--two if she wanted to count George Goldfish, now freed in the Audubon Park koi pond. Of course, her on and off relationship with Bobby Baroni through the years had been more friendship than anything serious, despite the fact they'd tried out the physical stuff a long time ago. She loved Bobby, but only as a friend. Besides, he was dating an exotic dancer at the moment, a really hot blonde who went by the name of Angel. And she had Mike Morgan. A shiver dispelled some of the heat inside the car. Oh yes. He was definitely a distraction. A hold-on-to-your-panties-this-is-gonna-be-good kind of distraction. He made her want to swear off panties altogether. Why did she have to go and get sidetracked by an undercover cop? Harley made one last trip to the nightclub's bathroom. One glance in the bathroom mirror was enough to convince her that four beers were past her limit. She looked like something out of Fright Night. Suddenly, the bathroom light went out. "Hey! I'm still in here!" She fumbled with the latch on the stall door, then eased out and felt her way along the tiled wall. She bumped into the sink and ricocheted off the opposite wall. Swearing loudly, she wrenched open the bathroom door and ran right into a solid wall of muscle. A smelly bag was yanked over her head and her arms were pinned in a viselike grip as she was dragged down the hallway and out into the alley. Whoever had her was trying to force her into a car, and she was just as determined not to go. Somehow, she got her legs up with one foot braced on each side of the open door. She blindly grabbed for a handful of his clothes to pull him off balance. He made a high-pitched sound like a loose fan belt and dropped her. His family jewels were probably missing a few stones by now. She crawled away and stumbled to her feet, ripping the bag from her head to yell for help