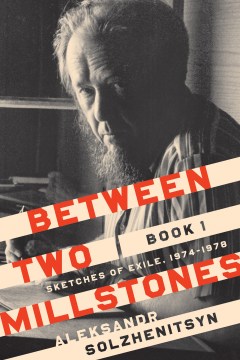 "This is the first publication in English of Aleksandr Solzhenitsyn's memoirs of his years in the West, Ugodilo zyornyshko promezh dvukh zhernovov: ocherki izgnaniya. They are being published here as two books: The present first book contains Part One. The forthcoming second book, under the title Between Two Millstones, Book 2: Exile in America, 1978-1994, contains Parts Two, Three, and Four"--Publisher's note

"Solzhenitsyn's memoir deals with events, episodes, and individuals of great historical and political significance. In Between Two Millstones, Solzhenitsyn gives an account of his first few bewildering months in the West after being forcibly exiled from the Soviet Union in 1974. He discusses his personal meetings with Margaret Thatcher and Pope John Paul II. Included in this work too, are Solzhenitsyn's views on the Cold War, Gorbachev's reforms, and the chaotic first few years of post-Soviet Russia, as well as his warnings of what was to come (including with respect to Ukraine). Solzhenitsyn's controversial observations on the West are also included; where he takes aim at the behaviors on display in the literary world, the abuses of freedom in larger society, and the groupthink that, he says, renders nominally free Western society as monolithic in its prevailing opinions as dictatorial Communist society was. And both these monoliths turn in unison like millstones, grinding away together against the west's and Russia's Christian heritage, against the wisdom of centuries, and against historical memory"--