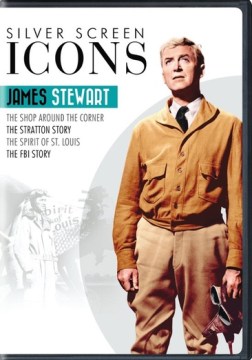 Container erroneously states that there is French dubbing and French subtitles on the discs, but there are not

The shop around the corner: The setting is pre-World War II Budapest. Bickering co-workers in a gift shop don't realize they're lonelyhearts penpals

The FBI story: The story of the FBI unfolds through the eyes of one of its agents. During his career he investigates gangsters, swindlers, the Ku Klux Klan, Nazi agents and cold war spies

The Stratton story: The true story of Chicago White Sox pitcher, Monty Stratton. Stratton suffers a devastating hunting accident which leads to the amputation of one leg. Learning to walk with an artificial limb, he struggles to resume his career

The Spirit of St. Louis: Biography of Charles Lindbergh from his days of precarious mail runs in aviation's infancy to his design of a small transatlantic plane and the vicissitudes of its takeoff and epochal flight from New York to Paris in 1927

In English with optional English or Spanish subtitles; closed-captioned

Shop around the corner