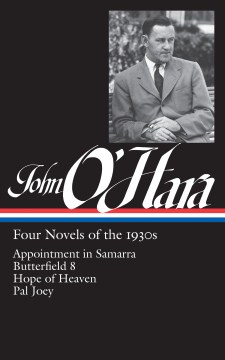 Already a frequent contributor of well-crafted stories to The New Yorker when he turned to the larger canvas of the novel, John O'Hara wrote with unusual acuity about the power of status and class in American life. His reputation as a novelist rests largely on four extraordinary books published from 1934 to 1940. These early novels, like those of his contemporaries Ernest Hemingway and F. Scott Fitzgerald, dramatize the longings and dashed hopes of a generation seduced and betrayed by the glittering temptations of the modern age

Appointment in Samarra: One of the great novels of small-town American life, Appointment in Samarra is John O'Hara's crowning achievement. In December 1930, just before Christmas, the Gibbsville, Pennsylvania, social circuit is electrified with parties and dances. At the center of the social elite stand Julian and Caroline English. But in one rash moment born inside a highball glass, Julian breaks with polite society and begins a rapid descent toward self-destruction. Brimming with wealth and privilege, jealousy and infidelity, O'Hara's iconic first novel is an unflinching look at the dark side of the American dream--and a lasting testament to the keen social intelligence if a major American writer

Butterfield 8: A bestseller upon its publication in 1935, Butterfield 8 was inspired by a news account of the discovery of the body of a beautiful young woman washed up on a Long Island beach. Was it an accident, a murder, a suicide? The circumstances of her death were never resolved, but O'Hara seized upon the tragedy to imagine the woman's down-and-out life in New York City in the early 1930s. "O'Hara understood better than any other American writer how class can both reveal and shape character," Fran Lebowitz writes in her Introduction. With brash honesty and a flair for the unconventional, Butterfield 8 lays bare the unspoken and often shocking truths that lurked beneath the surface of a society still reeling from the effects of the Great Depression. The result is a masterpiece of American fiction

Hope in Heaven: James Malloy, a screenwriter in 1930s Hollywood, falls in love with Peggy Henderson, a young woman with a mysterious past

Pal Joey: He was a singer and an M.C. in a cheap Chicago club, but Joey knew if nobody else did, that he was on his way to the big time. There were three kinds of women to Joey, the ones he could make, the ones he couldn't, and the ones with dough. But, one way or another, he used them all...there was Nan, for instance, Nan came to the club every night to hear Joey sing Deep Purple. She lived with her grandparents, but she had her own convertible...Jean's father was a bank, and Joey was thinking of making it legal, till this anonymous letter put the shiv in his back...Betty had a shape that you don't see only on the second Tuesday of every week, and when you see one you got to do something about it...Herta was a dumb little mouse, but willing to learn...And then there was Mavis. She was thirty-seven, if you could believe her driver's license. She had a few million gold chips, diamond initials inside her cigarette case, and she was so hot you could fry an egg on her