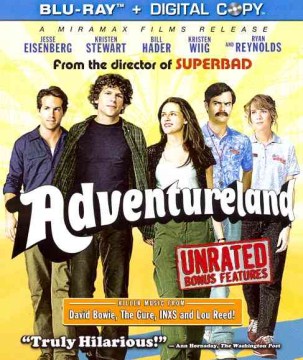 All Copies Checked Out
Adventureland
(2009)

In 1987, James Brennan's dreams of a European summer vacation before studying at an Ivy League school in New York City are ruined after his parents have a severe career setback. As a result, James must get a summer job to cover his upcoming expenses. He goes to work at the decrepit local amusement park, Adventureland - a place where the games are rigged and the rides make you sick. There, he falls in love with witty co-worker, Emily Lewin. In that setting, the two have an unforgettable and painful learning experiences about life, love and trust. A place where James discovers what he truly values

MPAA rating: R; for language, drug use and sexual references

English or dubbed French dialogue; French or Spanish subtitles; English subtitles for the deaf and hard of hearing

This is That (Firm)