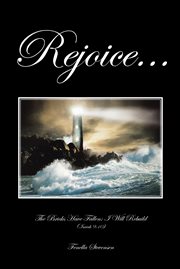 In the second of Fenella's three books, happiness is short lived in marriage eleven days to be exact, followed by a seven-year nightmare before finally bailing ship. The first book: Rejoice I Will Fear No Evil (Psalm 23) begins with physical abuse, but the marriage as told through the character of Jessica, was a relationship of emotional abuse, that led to planning suicide as the only escape. Having counselled and helped others, Jesse couldn't help herself! Of course, Jesse lives to tell the story, but has many sadness and three major bereavements to deal with, not to mention the unleashing of a great anger and bitterness in her heart and the spoils they bring. Whilst succeeding in a career working with young people having been forced out of mission, her personal life becomes a non-stop quest for love, internet dating, and a total failure, hidden behind the mask of a clown. A finger of fate flicks the switch bringing sickness - ME, and the ensuing realities of limitations, causing Jesse to go in pursuit of yet another lifelong dream to improve her quality of life requiring her to sell up, saying farewell to friends, seeking pastures new and fresh opportunities. Priding herself on being a survivor, Jesse brushes the hurts under the carpet and moves on til such a time when the hurts and disappointments become a mountain impossible to avoid and a volcano bursts beyond the mask, spewing the poisons within... and a realization that something has to change. Returning to her waiting Perfect Valentine, He empowers and encourages Jesse to break free from the chains of self-pity, low self-worth, and the constant cloud of failure, to a place of victory - with the dreaded mountain as rubble at her feet! When I stand before God at the end of my life, I would hope that I would not have a single bit of talent left, and could say, I used everything you gave me. I am touched by the almost childlike way Fenella Stevensen views life in her early years of Rejoice I Will Fear No Evil (Psalm 23) struck by the sincerity in each word, and the emotion which at times jump out of the pages. Fenella has unearthed an incredible talent in that her life story, but most of all in spreading the word that no matter where you come from, what dark journeys life makes you take, hope prevails. Patrick Jason - Malta Now