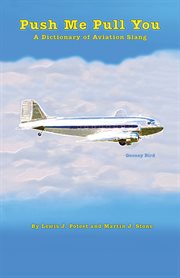 A lively, evocative, authoritative dictionary of words from the world community of flight, this book expresses the machismo, the terror, the care for technical excellence, struggles over the power of naming between PR for manufacturers and others, reporters, flight crews, ramp rats, PAX, cabin attendants. The exhilaration of a blue on blue flying day, the horror of a ground loop that goes bad, or a torque stall. Pilots, at the center, are extreme individualists in an activity that depends on teamwork mechanics, weather forecasters, air traffic controllers, computer experts, schedulers and trackers, dispatchers, ground crew. The stress produces variations in speaking that range from technical words to vivid slang exclamations (see Jesus nut). Sources include people from all the levels listed above, some aviation and space writers, Gulf War veterans, and required on-site research at air shows in Le Bourget, Farnsborough, Berlin, Ottawa, Abbotsford, and in Dayton, Pensacola (FL), CFB St. Hubert (Qc.), Dallas-Fort Worth, Renton (WA), Wichita (KS), Montreal, and at such WWII bases as Elvington, near York, England. The section on the names of aircraft includes both official names and the folk names given by those who actually had to fly or ride in them. I am amazed at how you have covered up all the profanity and kept such a clean book. You have made [this] look like a respectable language! Bill Robinson, Public Relations