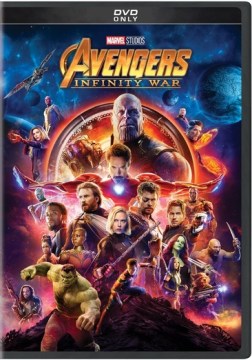 As the Avengers and their allies have continued to protect the world from threats too large for any one hero to handle, a new danger has emerged from the cosmic shadows: Thanos. A despot of intergalactic infamy, his goal is to collect all six Infinity Stones, artifacts of unimaginable power, and use them to inflict his twisted will on all of reality

Based on the Mavel comics by Stan Lee and Jack Kirby

MPAA rating: PG-13; for intense sequences of sci-fi violence and action throughout, language and some crude references CHV rating: PG

In English, Spanish, or French; Spanish or French subtitles; English subtitles for the deaf and hard-of-hearing (SDH); English descriptive audio track for people with visual disabilities