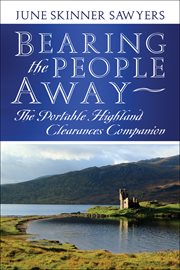 The Highland Clearances generally refers to the eviction of indigenous Gaelic-speaking people of the Scottish Highlands and Islands-roughly between 1790 and 1855-to make way for more profitable cattle and sheep farms and, later, sporting estates. The blunt result of these evictions was that of a culture fundamentally altered if not destroyed. Many Highlanders emigrated to Canada, the United States, Australia and New Zealand. A number of histories, novels, poems, plays, memoirs and songs have been written about the Clearances. In recent years some scholars have minimized the impact, referring to the historical accounts as being hyperbolic, an exaggeration fuelled by anger as much as by wishful nostalgia. Others maintain that the Clearances were an inevitable part of economic history and a necessary, if painful, consequence of progress. It is a story about a particular subset of people in a particular area of a small northern nation, but it is also the larger story of the not-always-noble state of the human condition-the strong overwhelm the weak with their resources, their power and their ambition. It is, in other words, a fundamentally human story and its casualty was people-not just cold statistics on a sheet of paper, but flesh-and-blood human beings. The Clearances-an iconic image and a concept-is of deeply rooted and profound symbolic importance for Scots in the Highlands and in the global Scots diaspora. Bearing the People Away is the only one-volume companion to one of the most defining moments in Scottish, and indeed, British history. Part reference guide, part handbook, part travel guide and part resource, Bearing the People Away uses an encyclopedia format geared toward the general reader. The entries vary in length from brief sentences to several pages. They include major Clearances sites, major and minor figures associated with the Clearances, Clearances-related sites outwith Scotland (Canada, the United States, Australia and New Zealand, for example), places and historical events with Clearances and or Highland connections, and books, recordings and relevant museums and organizations identified with the Highland Clearances