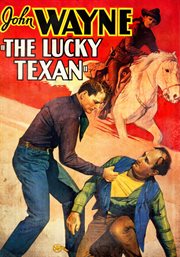 John Wayne returns in an adventure so large that Texas can barely contain it! Returning from College, Jerry Mason reunites with his father's friend, and the two strike it rich when they stumble upon a gold mine. Greedy bankers decide to kill the old man to steal his ranch and gold mine while framing Jerry for his murder! Luckily the Old man survives to tell the tale to Jerry, and now he is on the trail to catch the criminals, clear his name and save the day!

Angel and the badman