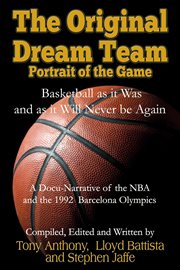 Available
The original dream team. Portrait of the Game
(2012)
By: Battista, Lloyd

The original, and some say only, Dream Team, the greatest sports team ever, was the 1992 U.S. Olympic Men's Basketball Team that amazed fans around the world and transformed the NBA into a global phenomenon. The team that created this book are filmmakers and, in every instance, they went for the dramatic line of sports history. They highlight the inherent drama of every play, every game, every deeply moving human event in their Portrait Of The Game. They present a cumulative portrait of the living, breathing and changing world of hoops as it was in the period just before the Original Dream Team's creation - and how that changed forever, the Modern Olympic Games as we know them, and the game of basketball itself. In the two decades that have passed since the games in Barcelona, the legend of that time is as potent as ever. It's the story of a group of players who changed the game forever, the twelve members of the Original Dream Team: Charles Barkley, Forward, Phoenix Suns Larry Bird, Forward, Boston Celtics Clyde Drexler, Guard, Portland Trailblazers Patrick Ewing, Center, New York Knicks Magic Johnson, Guard, Los Angeles Lakers Michael Jordan, Guard, Chicago Bulls Christian Laettner, Forward, Duke University Karl Malone, Forward, Utah Jazz Chris Mullin, Forward, Golden State Warriors Scottie Pippen, Forward, Chicago Bulls David Robinson, Center, San Antonio Spurs John Stockton, Guard, Utah Jazz