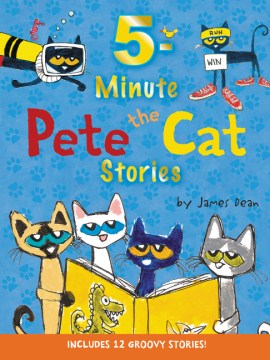 Pete the cat and the bad banana. Pete the Cat bites into a bad banana and vows never to eat bananas again, even though he generally likes the fruit

Go, Pete, go! A groovy Pete the Cat adaptation of "The Tortoise and the Hare" finds a bike-riding Pete accepting a challenge from Turtle, who has a new racing car with cool gadgets

Sir Pete the brave. When a dragon kidnaps Lady Callie, Sir Pete the Brave must come to her rescue

Rock on, mom and dad! Pete the cat decides to surprise his Mom and Dad to express his gratitude for everything they do for him

Pete the Cat's train trip. Embarking on a train trip to visit his grandmother, Pete the Cat accompanies the conductor on a tour of the train, looks at the engine and blows the whistle while making new friends and playing train-themed games

Scuba-Cat. As Pete the Cat searches underwater for a seahorse, he comes into contact with all manner of sea creatures

Cavecat Pete. Pete the Cat grooves back in time to the Jurassic era, where under the guise of "Cavecat Pete," he helps his herbivore and carnivore friends learn to get along

Pete the Cat at the beach. "Pete is spending the day at the seashore. He has fun collecting shells and building a sand castle. But the beach is very hot. There is a whole ocean for Pete to cool off in, but it looks scary. Pete's brother, Bob, offers to teach Pete to surf. Will that be enough to help Pete get over his fear of the water?"--Description from Amazon.com

Pete's big lunch. Pete the cat shares his big lunch with his friends

Robo-Pete. When Pete's friends don't want to play the same games as he does, Pete has a great idea--he'll build a robot that's just like him! But when Robo-Pete gets a little out of control, Pete realizes the best thing about his friends is that no matter what they like to play, it's always fun when they're all together

Construction destruction. Pete the cat gets construction workers and equipment to build the coolest playground ever

Hare and the tortoise.

Pete the cat and the bad banana

Rock on, mom and dad!

Pete the Cat at the beach