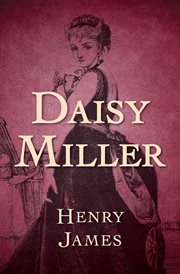 A young American woman searches for love and independence in Europe in this iconic tale. Old World and New World values collide in this classic coming-of-age romance. A delicious comedy of manners from master storyteller Henry James, Daisy Miller has long reserved its place in the annals of America's most oft-read novellas, and its examination of culture and class differences continues to resonate today, on both sides of the Atlantic. Annie 'Daisy' Miller is a new-money American girl from Schenectady, New York, on a European tour with her family. While at an upper-crust lakefront retreat in Switzerland, Daisy's younger brother, Randolph, introduces her to the older, more refined Frederick Winterbourne, and the Swiss-educated man is stunned by Daisy's unique combination of na̐veť and flirtatiousness. As rumors fly regarding Daisy's active nightlife and her suspect relationship with a young Italian man, Winterbourne chases her to Rome, his meddlesome aunt questioning the girl's breeding and propriety all the while. Rich in complex characterizations and superb in its economies of form, Daisy Miller is a must-read for serious connoisseurs of American literature, who will appreciate how James renders such an expansive world within a relatively tight space. Written by a master of his craft, this novella is easily one of James's most beloved works, timeless in its approach to the complexities of the human heart