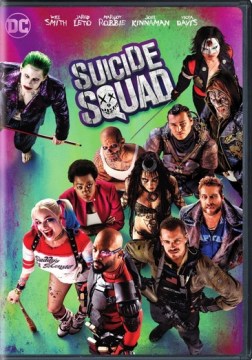 U.S. intelligence officer Amanda Waller has determined that only a secret group of despicable individuals with nothing to lose can avert a potential apocalypse. So, she has assembled the world's most dangerous super villains, given them a powerful arsenal of weapons, and sent them off on a suicide mission

Based on the characters from DC Comics

DVD release of the 2016 motion picture

MPAA rating: PG-13; for sequences of violence and action throughout, disturbing behavior, suggestive content and language

In English, dubbed French or dubbed Spanish, with optional subtitles in Spanish or French

English subtitles for the deaf and hard of hearing (SDH)

Optional descriptive audio in English for the visually impaired