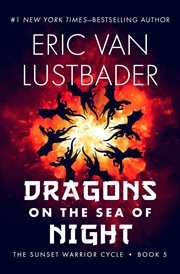 Available
Dragons on the sea of night
(2014)
By: Lustbader, Eric

In the continuation of the epic Sunset Warrior fantasy series, a man-god rises once more to confront a fearsome and unstoppable evil in a savage world where nothing is as it seems. Once he was but a man named Ronin. Trained as a swordsman, endowed with breathtaking skill, he was not destined merely to live and then die in a doomed city beneath a frozen world. Many years have passed since he first ventured into the void. Now he possesses powers beyond all imagining - godlike abilities both marvelous and terrible. Now he is revered and feared as savior and avenger, the tamer of monstrous beasts, the destroyer of the dark angel of Chaos - and dearly loved by his devoted bond-brother, Moichi Annai-Nin, and the beautiful, enigmatic, and lethal Chiisai. Now he is Dai-San, the Sunset Warrior. Gone are the days of fire, ice, and necromancy, and yet there are grave perils in this world of illusion - and enemies, once defeated, who seek a way back to this plane, driven by an insatiable need for vengeance. For Chaos must again have its day, and no power in the universe can prevent its terrible reemergence - not even the might of the Sunset Warrior. In the fifth novel of the Sunset Warrior Cycle - an ingenious blending of fantasy, technology, spirit, and swordplay - bestselling author Eric Van Lustbader brings back to life some of the most beloved characters in fantastic literature in a story of danger, loyalty, fate, and friendship. The legend of the Dai-San grows ever stronger as the action-packed epic tale continues