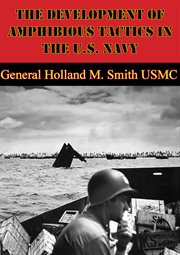 Available
The development of amphibious tactics in the u.s. navy
(2015)
By: Smith, USMC, General Holland M

FROM our entry into the war at Pearl Harbor in December 1941 until the Japanese surrender in September 1945, every major offensive campaign launched by the United States was initiated by an amphibious assault. Our landings at North Africa in November 1942, at Sicily and Italy in July and September 1943, and at Normandy and Southern France in June and September 1944 ended in the defeat of the German armies in Western Europe by the Allied Expeditionary Force in May 1945. The Pacific offensive, which began in the South Pacific with the landings at the Solomons in August 1942 and in the Central Pacific at the Gilberts in November 1943, carried us 3,000 miles to the Philippine Islands and 5,000 miles through to the inner defenses of the empire in the Volcano and Ryukyu Islands....Amphibious warfare was the primary offensive tactic in our conduct of global war. The tactics and techniques of our landing operations represent a new and significant development in the art of war. Although military history contains many instances of landing operations conducted by both military and navy forces in all parts of the world, from the early time man first crossed the sea to wage war, the landings were generally either limited in scope and purpose or unopposed. The feasibility of amphibious raids, in which assault forces landed from the sea are withdrawn after limited operations, and of unopposed landings, relying on surprise and conducted for the purpose of subsequent military operations ashore, has long been recognized. Until the recent war, however, the effect of modern defensive weapons was considered too decisive to permit successful assault from the sea. The development of radar, aviation, coast defense guns, torpedoes, submarines, mines, defensive obstructions and obstacles, automatic weapons, highly mobile reserves, and the necessary communication facilities to coordinate and control them seemed to present insurmountable difficulties to amphibious attack