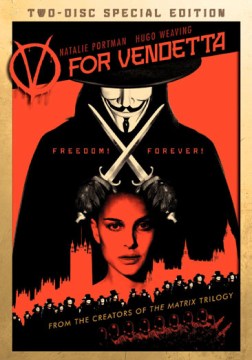 Set against the futuristic landscape of totalitarian Britain, the story of a young working-class woman, Evey, who is rescued from a life-and-death situation by a masked man known only as 'V.' Incomparably charismatic and ferociously skilled in the art of combat and deception, 'V' ignites a revolution when he urges his fellow citizens to rise up against tyranny and oppression. As Evey uncovers the truth about 'V's' mysterious background, she also discovers the truth about herself. She becomes his ally in his plan to bring freedom and justice to a cruel and corrupt society

Originally produced as a motion picture in 2005

MPAA rating: R; for strong violence and some language