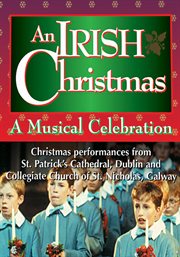 The program opens with a delightful Christmas pageant of song pays tribute to the old city of Dublin as it celebrates its millennium. Join a spectacular cast of singers and musicians marking the occasion with an enchanting evening of Irish Yuletide magic at St. Patrick's Cathedral. The glorious confines of St. Patrick's Cathedral provide a magnificent concert setting for performances by its own gifted choir, as well as the West Point Glee Club, the RTE (Radio Telefeis Eire) Concert Orchestra, the RTE Philharmonic Choir, and the internationally renowned solo talents of Bernadette Greevy, Catherine Coates, and Dennis O' Neill. Musical highlights include: "Silent Night," "O Come, O Come Emmanuel," "Ave Maria," "Once in Royal David's City," "Adeste Fideles," "Go Tell It on the Mountain," "Hallelujah Chorus" and "What Child is This?" A Christmas celebration like this only comes around once every one thousand years, and this program ensures you can enjoy this one magic evening again and again. In the second part of the program, Galway, the ancient city of stone and water, cordially invites you to a holiday celebration filled with song. These soul-stirring Christmas performances were filmed at Galway's famed Collegiate Church of St. Nicholas, the living symbol of a modern city with ancient traditions. It's a night of extraordinary talent, featuring hundreds of beautiful voices from The Galway Baroque Singers and The Choristers of Belfast Cathedral. The songs include such classics as: "The First Noel," "O Silent Night," "Torches," "The Holly and The Ivy," "Ding Dong Merrily," "Handel's Messiah" and "The Zither Carol." This special Irish Christmas celebration continues at such venerable locations as the Cathedral of Our Lady Assumed Into Heaven and The Spanish Arch, as music brings the city to life just as it has for centuries on end