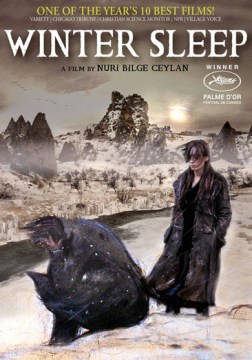 DVD release of the 2014 motion picture

Winner of the Palme d'Or at this year's Cannes, the new film from Turkish auteur Nuri Bilge Ceylan (Once Upon A Time In Anatolia) is an immersive and provocative drama. Set in the picturesque and striking landscape of Cappadocia in Central Anatolia, Winter Sleep focuses on a small village, half-empty, in the wintry off-season. The film follows a local celebrity, Aydin, an actor who runs a small hotel with his wife, writes a column for the local newspaper, and is toying with the idea of producing a book on Turkish theatre. With a steady, penetrating gaze reminiscent of that which Ingmar Bergman brought to his chamber pieces, Ceylan cuts through the smug self-image of a man who considers himself of elevated stature, but is ultimately brought face-to-face with who and what he truly is. Awarded the International Critics Prize in Cannes in addition to the Palme d'Or, Winter Sleep is a compelling and hypnotic study of human frailty