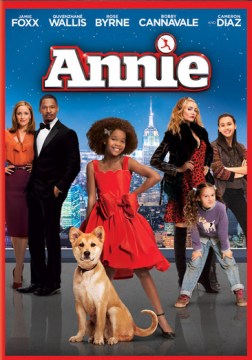 Based on the musical stage play Annie, book by Thomas Meehan, music by Charles Strouse, lyrics by Martin Charnin and on "The Little Orphan Annie" © and ® Tribune Content Agency, LLC

Annie is a young, happy foster kid who's also tough enough to make her way on the streets of New York. Originally left by her parents as a baby with the promise that they'd be back for her someday, it's been a hard knock life ever since with her mean foster mom Miss Hannigan. But everything's about to change when the hard-nosed tycoon and New York mayoral candidate Will Stacks, advised by his brilliant VP, Grace and Guy, makes a thinly-veiled campaign move and takes her in

Originally released as a motion picture in 2014

Some special features include subtitles in English or Spanish

MPAA Rating: PG; for some mild language and rude humor