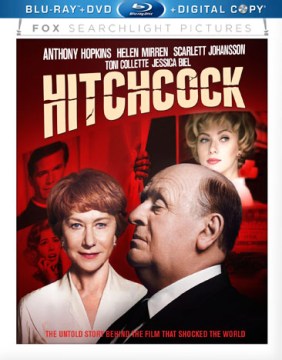 "Plagued by both a reckless ego and nagging self-doubt, Hollywood legend Alfred Hitchcock ... becomes obsessed with a grisly murder story that the studios won't back. Determined, he risks his reputation, his home and even the love of his wife Alma ... as he sets out to make the film"--Container

"Based on the book Alfred Hitchcock and the making of Psycho, by Stephen Rebello."

Special features on Blu-ray disc only include a deleted scene; the featurettes Becoming the master: from Hopkins to Hitchcock, and, Obsessed with Hitchcock; Sacha Gervasi's behind-the-scenes cell phone footage; Hitchcock cell phone PSA; the story; the cast; Danny Elfman maestro; the featurette Hitch and Alma; remembering Hitchcock; and optional commentary with Sacha Gervasi and Stephen Rebello

Rebello, Stephen. Alfred Hitchcock and the making of Psycho