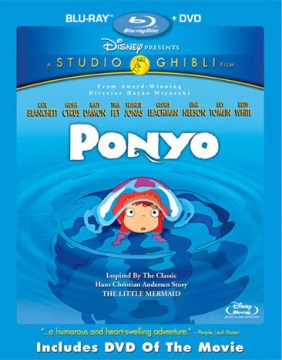 A young boy named Sosuke rescues a goldfish named Ponyo, and they embark on a fantastic journey of friendship before Ponyo's father forces her to return to the sea. Ponyo's desire to be human upsets the balance of nature and only Ponyo's mother can restore nature's balance and make Ponyo's dreams come true. Includes World of Ghibli, an extraordinary interactive experience

Special features include: The world of Ghibli (Enter the lands; Behind the studio); Meet Panyo; storyboard presentation of the movie

At head of title on disc : Disney presents a Studio Ghibli film