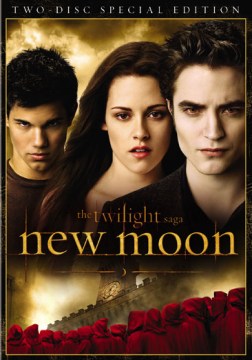 Bella is still very much in love with Edward. The rest of the vampire coven who call themselves the Cullens, especially Alice, decide to throw Bella a private party for her eighteenth birthday. Things go wrong when Bella cuts her finger and thirst overcomes the vampires. As a result of the danger Bella was put through, the Cullen family decide to leave Forks, Washington. Bella becomes so depressed that she exempts herself from all social activities. But, she realizes she can coexist with childhood friend, Jacob. As usual for Bella, things aren't what they seem. Something is happening to Jacob that he can't explain to Bella, and their friendship starts to deteriorate. But when Alice returns to tell her that Edward thinks she is dead, Bella must go on a journey to save Edward from wanting to die himself

Based on the novel "New moon" by Stephenie Meyer

Originally released as a motion picture in 2009

MPAA rating: PG-13; for some violence and action

English or dubbed Spanish dialogue, Spanish subtitles; English subtitles for the deaf and hard of hearing