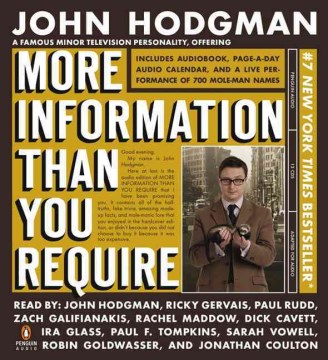 Available
More information than you require
(2009)
By: Hodgman, John

Television personality John Hodgman presents a tongue-in-cheek compendium of half-truths and fake trivia including a page-a-day calendar of made-up facts that did not happen on particular dates, and a live performance of 700 mole-man names, which explores the identities and culture of the mole-men, a race of humanoids that supposedly live in a complex warren of tunnels and vast caverns beneath the earth

Sequel to: The areas of my expertise

More information than you require --

Today in the past --