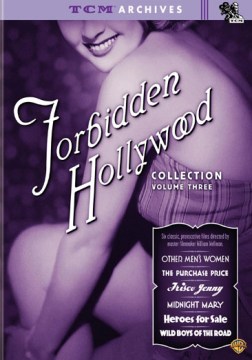 Disc 1: First, Bill and Jack are railroad men. When Bill comes to stay with Jack and his wife, Bill and Lily fall in love. Jack confronts Bill about his suspicions and the two fight, leaving Jack seriously injured. Last, Joan Gordon is a singer tiring of her relationship with Eddie. She flees to North Dakota to become a mail-order bride. Happiness is threatened by her stubborn husband, a lecherous neighbor and the appearance of Eddie

Disc 2: First, Jenny was orphaned by the 1906 earthquake and fire and has gone on to become the madame of a prosperous bawdy house. After putting her son up for adoption, he becomes a district attorney dedicated to closing down such houses. She kills an underling who wants her son dead and is now facing execution. Last, A mistaken arrest, a prison term, and lack of employment leads to a young woman's involvement with gangsters. In a brothel she meets a wealthy lawyer who falls in love with her. He helps her turn her life around, but her past catches up with her. Now she is on trial for murder

Disc 3: First, A man stands up during a WWI battle and becomes a hero, but he doesn't get the credit. He becomes injuried and soon gets hooked on morphine, causing him to fall apart when he returns home. He eventually marries, but soon the Depression hits. Last, Tom and Ed are high school students whose parents, thanks to the Depression, have lost their jobs. Wanting to help make money, they set off on the rails looking for work. They finally end up in New York and Ed thinks he might have foud a job

Special features: Disc 1: S.S. Dine detective short: "The Wall Street mystery;" 2 classic cartoons "Moonlight for two" and "You don't know what you're doin!;" theatrical trailers of "Other men's wives" and "The purchase price."

Disc 4: Wild Bill: Explores the life and directorial times of William A. Wellman. The men who made the movies: Wellman shares many stories and speaks bluntly of the producers with who he has worked and describes his remarkable star-making and star-spotting abilities. He was responsible for helping actors win Oscars and discovered such notable actors as James Cagney and Gary Cooper

Special features: Disc 3: Commentary on "Heroes for sale" by historian John Gallagher; commentary on "Wild boys of the road" by William Wellman, Jr. and historian Frank Thompson; S.S. Van Dine detective short "The trans-Atlantic mystery;" 2 classic cartoons "One step ahead of my shadow" and "Sittin' on a backyard fence;" theatrical trailers of "Heroes for sale" and "Wild boys of the road."

The men who made the movies: William A. Wellman: Editor, Bryan McKenzie

English dialogue, French subtitles; English subtitles for the deaf and hard of hearing