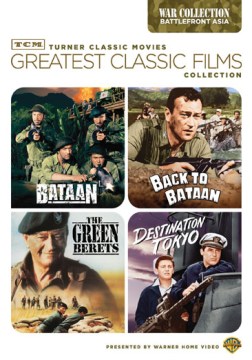 Bataan: A U.S. Army sergeant fights a rear-guard action in the Philippine jungle in order to cover MacArthur's retreat. His platoon of 13 soldier, including a few veterans, a couple of green recruits, and other assortments of soldiers and officer types, are sensable enough to follow the sergeant's judgment. The group is whittled down through misadventure, disease, and skirmishes with the ever-advancing Japanese, till only a handful remain for a still-shattering last stand. -- Back to Bataan: Colonel Joe Madden is an American soldier who stays behind to organize a ragtag guerrilla army in the forests and hills of the Philippines. At his side is Captain Andres Bonifacio, grandson of a legendary revolutionary martyred in the nation's old war against Spanish colonialists. Joe, Andres, and their fearless irregulars sap the enemy's resolve through hit-and-run missions. As time passes the locals wonder why America doesn't return with troops and weapons. -- Destination Tokyo: Captain Cassidy and his crew of submariners are ordered into Tokyo Bay on a secret mission. They are to gather information in advance of the planned Doolittle air raid on Tokyo. After getting the information they need, they face the harrowing task of getting out of Japan once their presence is detected. -- The Green Berets: Col. Mike Kirby picks two teams of crack Green Berets for a mission in South Vietnam. Their first mission is to build and control a camp that is trying to be taken over by the enemy. The second mission is to kidnap a North Vietnamese general

The Green Berets is from the novel by Robin Moore

Special features: Disc 1, side A: Theatrical trailer. -- Disc 2, side A: Vintage wartime short "Gem of the ocean;" Cary Grant movie trailer gallery ; side B: "The moviemakers: the making of the Green Berets" vintage featurette; theatrical trailer

Not rated (Bataan, Back to Bataan, Destination Tokyo) and MPAA rating: G (The Green Berets)

(Bataan): English or dubbed French dialogue, English or French subtitles; English subtitles for the deaf and hard of hearing

(Back to Bataan): English dialogue, English, French or Spanish subtitles; English subtitles for the deaf and hard of hearing

Side B: Back to Bataan / [presented by] RKO Radio Pictures, Inc. ; screenplay by Ben Barzman and Richard H. Landau ; directed by Edward Dmytryk ;