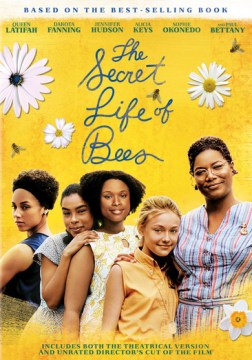 Available
The secret life of bees
(2008)

Lily Owens is a young girl who lives on the peach farm that her abusive father owns. Rosaleen is a black woman hired by Lily's father to be a stand in mother for Lilly. Rosaleen insults some of the biggest racists in their town. Lily and Rosaleen run away to a town Lily believes that her mother once lived in. They go to live with the three Boatwright sisters on their honey farm. She finds solace in their mesmerizing world of beekeeping

Based on the novel by Sue Monk Kidd

MPAA rating: PG-13; for thematic material and some violence