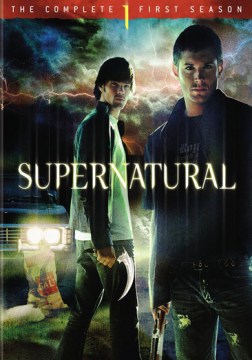 Sam Winchester grew up hunting creepy, demented, unexplainable, unearthly and terrifying things. But law school, safety and normalcy beckon him until Sam's estranged brother appears with troubling news: their father, a man who's been hunting evil for 22 years, has disappeared. So now, to find him, the brothers must hunt what their father hunts and Sam must return to the life he thought he'd left behind

Originally broadcast on television in 2005-2006

Contains all 22 episodes from the first season

Not rated; special features contain graphic violence that may not be recommended for viewers younger than 17

DVD-ROM minimum system requirements: InterActual player (included on disc), Microsoft® Windows 98SE, Microsoft® IE 5.5, Macromedia Flash Player 6.0, an Internet connection, a DVD-ROM drive and a DirectShow-compatible DVD decoder. This DVD will not work in a CD-ROM drive and the DVD-ROM features are not available on Apple® Mac® OS