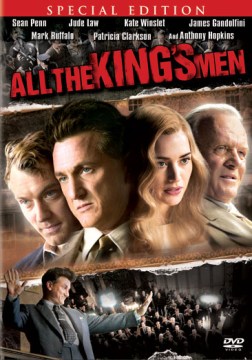 Based on the novel by Robert Penn Warren

Willie Stark is an uncorrupted small-town mayor in 1950s Louisiana. He gets picked by the political machine to run as a wild card candidate in the upcoming gubernatorial race. But, when Willie realizes that he is being manipulated, he veers off on his own to become the darling of the electorate's downtrodden and forgotten hicks. Covering the campaign for a local paper is Jack Burden, whose editorial pieces become so admiring of Willie that he's fired. But, when Stark wins, Burden hires onto the new governor's team as a personal aide. Once in office, Governor Stark antagonizes the state legislature, the oil companies, and the moneyed classes with his share-the-wealth promises to the sweaty masses. Legislators become so outraged that they start serious impeachment talk, a move supported by the admired and retired Judge Irwin, who also happens to be Jack's godfather

DVD release of the 2006 motion picture

In English or dubbed French with optional English or French subtitles