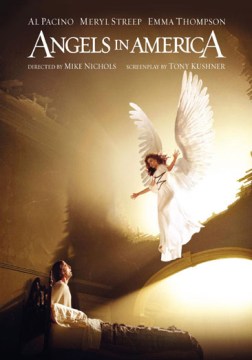 Originally broadcast by HBO in 2003

God has abandoned Heaven. It's 1985 and the Reagans are in the White House. Death is swinging the scythe of AIDS. In Manhattan, Prior tells Lou, his lover, he's ill and Lou decides to bolt. As disease and loneliness ravage Prior, guilt invades Lou. Joe is an attorney, who is Mormon and Republican, is pushed by right-winger Roy toward a job at the Justice Dept. Both Joe and Roy are in the closet: Joe out of shame and religious turmoil; Roy to preserve his power and access. An angel invites Prior to be a prophet in death. Joe's mother and Belize, a close friend, help Prior choose

Based on the play by Tony Kushner