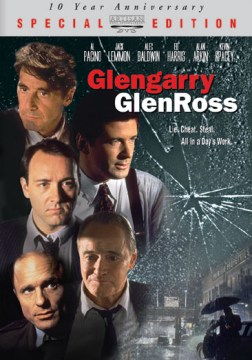 Story set in the world of real estate. Times are tough at Premiere Properties. Shelley "the machine" Levene (Lemmon) and Dave Moss (Harris) are veteran salesmen, but only Ricky Roma (Pacino) is on a hot streak. The new Glengarry sales leads could turn everything around, but the front office is holding them back until these "losers" prove themselves. Then someone decides to take matters into his own hands, stealing the Glengarry leads and leaving everyone wondering who did it

Videocassette release of the 1992 motion picture by Zupnik Enterprises