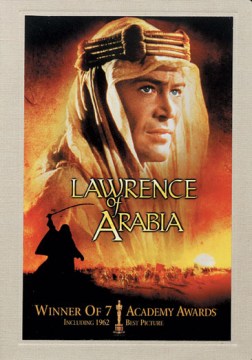 All Copies Checked Out
Lawrence of Arabia
(1962)

The story of T.E. Lawrence (Peter O'Toole), the heroic and troubled man who organized the Arab nations to fight the Turks in World War I and then, having reached a pinnacle of power in Mideast politics, retired to postwar military obscurity

Based on T.E. Lawrence's Seven pillars of wisdom

Booklet is a reproduction of the original 1962 souvenir booklet

Features include: disc one: archives of Arabia ; historic photographs ; take you behind-the-scenes (Part 1) ; Journey with Lawrence ; interactive map of the Middle East -- disc two: exclusive documentary, The making of Lawrence of Arabia ; a conversation with Steven Spielberg ; four original featurettes: Maan, Jordan: The Camels are cast, In search of Lawrence, Romance of Arabia, Wind, sand and star: The making of a classic ; original newsteel footage of the New York premiere